A few hundred miles away, Hurricane Irene is churning up the Atlantic heading towards us in southeastern Pennsylvania. The local news is reporting that we will have a tropical storm with 5-10 inches of rain later tonight. All we can do now is wait.
It is eerily quiet outside.  There is not one bird in sight or to be heard. The sky is beginning to get overcast and it is raining lightly but the light is still bright enough to take photos. It has been a warm and sunny summer and although there are still a few tomatoes in the garden, and everything is still green, there are subtle signs of fall. This is one of those moments when a natural event intervenes in our busy lives and allows us to pause and just absorb everything the moment has to offer.  I decided to take a walk in the rain around my garden and the yard beyond. 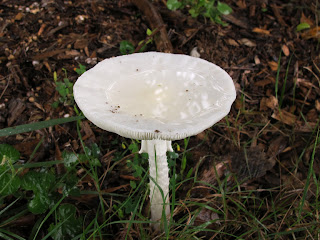 The Art of Custom Jewelry

One of the great pleasures I derive from being a jeweler is the occasional new design project that involves an old piece of jewelry. In this case, grandmother’s ring is being dismantled and the diamonds are to be used for a new set of wedding rings.

I recently met with a young couple that needed wedding bands for their August wedding. The groom to be had already given his fiancée a solitaire diamond engagemant ring. The bride to be had been given her grandmother's diamond wedding ring to be used for a new wedding band. The design challenge for me was to create a new band and to use most or all of the diamonds.  Also, I would be providing a wedding band for the groom.

The engagement ring is a somewhat modern style of heavy round wire that wraps the finger, twists a bit and holds the diamond with two wide bezels. A standard flat band would not lie against the side evenly. I ruled out this option because over time the wear on the rings would be very uneven. Since wedding rings are worn together continuously for years, it is important when designing them to pay close attention to where the metal touches and how they nest together.

The solution was to make two diamond bands to be worn with the solitaire. There were enough stones to create a great look. And, it was decided that two small stones could be used in the groom’s band too.  I made two rings in wax then photgographed them with her ring. 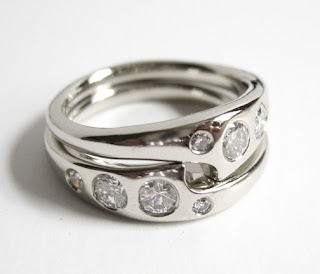 The groom opted for traditonal pave for his band. Just like the original sketch, two stones have been set in the grooms wedding band on the diagonal with a slight arc in the bright cut. 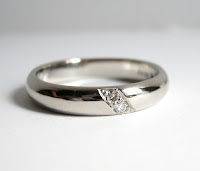 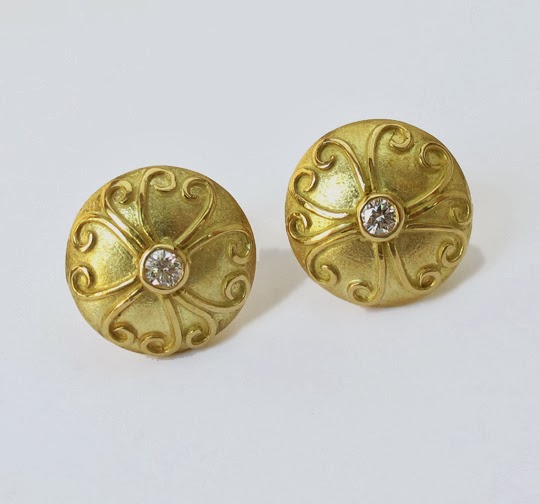